Around 250 people attended the National Ecumenical Prayer Service in preparation for the UN Climate Summit and in the presence of President Michael D Higgins that was held in St Teresa’s, Clarendon Street, on 25th November 2015.

The aim of the service, which ECI organised with Trócaire and Christian Aid, was to pray for climate justice and to pray in particular for a successful outcome to COP21 – that is, for a sustainable and legally-binding climate agreement. 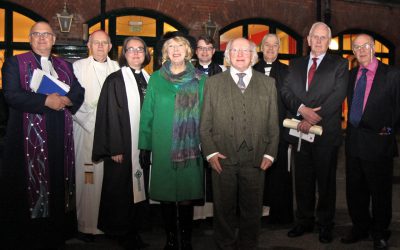 President Michael D Higgins and his wife Sabina were in attendance and were joined by clergy and laity from Catholic, Church of Ireland, Presbyterian, Methodist and Lutheran churches and members of the Religious Society of Friends (Quakers).

The service was led by ECI Chairperson, Ven Andrew Orr, who said the COP21 talks represented the best, and possibly the last, chance to reach agreement on measures to reduce greenhouse gas emissions, which would be necessary to keep global temperature rise under two degrees Celsius.

He said that Christians must take action as well as pray. “Pressure has to be put on politicians to make this summit meaningful and this will happen if we make our voices heard …. Let us not underestimate the gravity of the task that lies before us.  Let us not underestimate its urgency.  But, as Christians, let us be people of hope and trust in God who calls us to serve and protect God’s earth of which we are a part, and on which we depend for life. 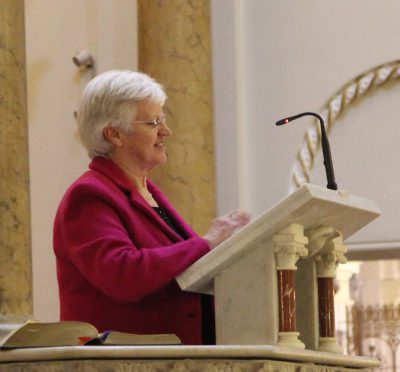 Nellie McLaughlin RSM delivered a reflection in which she talked about looking towards the UN Climate Summit with both hope and some fear. “At this moment we stand together with billions of our human companions and countless billions of our kin in the wider community of life embracing the dream of present and future generations as we look with hope – hope tinged with fear – towards the global climate summit in Paris,” she said.

She said the consequences of climate change reverberated around the planet and rendered millions of people and species poor, isolated and homeless or habitat-less. “Our current western economic model based on unlimited consumption of limited resources is madness,” she said. “This is especially true when wedded especially to profit at any cost and vested interests. How can we say that we are creating a better future when there is such ecological deterioration and human devastation?”

Sr Nellie spoke about the urgent need for a personal and communal ecological conversion: “May we boldly step up to the collective challenge created by having lost our way and settled for the ultra-comfortable over the common good as together we endeavour to create a better world where all will feel at home in our common home.” During the service representatives of each denomination presented official documents pledging their commitment to care for creation.

Before the end of the service Ven Andrew Orr presented ECI’s specially commissioned Shine a Light on Climate Justice candle to Pastor Martin Sauter of St Finian’s Lutheran Church, Dublin. It is hoped the candle will travel around the 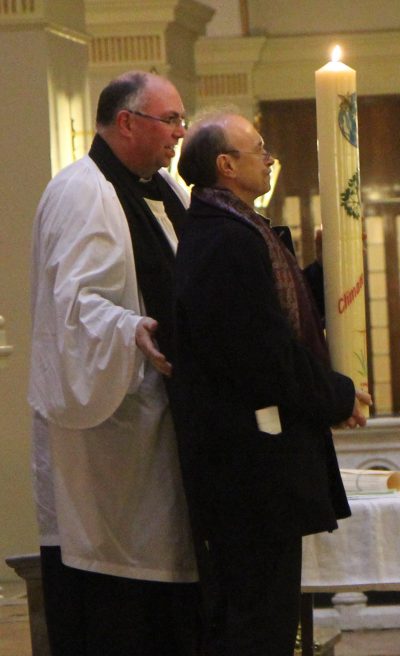 country over the next 12 months visiting a different church each week and encouraging parishes to focus on climate justice.

The service concluded with a pledge to live responsibly and to honour God’s Creation. People were also urged to join the People’s Climate Marches taking place four days later in many parts of the country.