A report from Jane Mellett, ‘Our Common Home’ Project Co-Ordinator:

The World Meeting of Families event in Dublin in August 2018 had Caring for Our Common Home as a core theme running throughout the festival. An enthusiastic team of 40 eco-volunteers helped to bring the message of Laudato Si to pilgrims during the RDS Pastoral Congress.

There were a number of eco-spaces helping to spread the message such as a beautiful Our Common Home Contemplative Garden, an eco-Teen Tent, a Children’s Caring and Sharing Space which held eco-themed workshops each day, the Giant Laudato Si Globe; Imogen Stuart’s Beehive Cell and much more. One of the most interactive and prayerful spaces however was the eco-prayer space which was located in the main Prayer Marque, alongside the WMOF Icon and Adoration Space for the duration of the pastoral congress.

Thanks to Eco-Congregation Ireland this space hosted the Climate Justice Candle at its centre. This Climate Justice Candle has been on tour in Ireland to Christian parishes and community groups since the Paris Climate Agreement in 2015. Surrounding this candle were signs which brought pilgrims on a journey using quotes from Laudato Si and images associated with Climate Justice. Pilgrims were able to write a prayer for the earth on eco-ribbons or prayer flags. These were hung on the surrounding walls. People sat on cushions having time to reflect, walked around the photo exposition, wrote their prayers for the earth and were also able to sign the Laudato Si pledge if they wished www.LiveLaudatoSi.org. 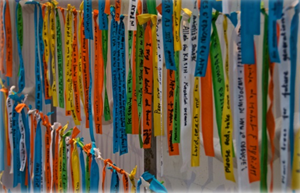 The ribbons and prayer flags accompanied the climate justice candle to the final liturgy in the RDS on Friday 24th August where it was clearly visible on the main sanctuary during the mass and led the final procession with eco-volunteers and Trocaire volunteers. The Candle, prayer flags and ribbons were then brought to Christchurch Cathedral for that evening’s interfaith event on Our Common Home which was attended by 400 people and included speakers from across faith communities in Dublin.

These prayers are being carried on the GCCM pilgrimage which leaves from the Vatican on October 4th and travels on foot to COP24, the UN Climate Conference, which is taking place in Krakow Poland in December 2018.

We are so grateful to Eco-Congregation Ireland for allowing us to host the candle for this historic event in Dublin. We know it had a powerful impact on pilgrims who spent quiet time in this space throughout the congress. We hope that it will encourage many parishes to host this candle in the future and continue to care for our common home.